Review: The Coldest Girl in Coldtown by Holly Black

Tana lives in a world where walled cities called Coldtowns exist. In them, quarantined monsters and humans mingle in a decadently bloody mix of predator and prey. The only problem is, once you pass through Coldtown’s gates, you can never leave.

One morning, after a perfectly ordinary party, Tana wakes up surrounded by corpses. The only other survivors of this massacre are her exasperatingly endearing ex-boyfriend, infected and on the edge, and a mysterious boy burdened with a terrible secret. Shaken and determined, Tana enters a race against the clock to save the three of them the only way she knows how: by going straight to the wicked, opulent heart of Coldtown itself.

The Coldest Girl in Coldtown is a wholly original story of rage and revenge, of guilt and horror, and of love and loathing from bestselling and acclaimed author Holly Black.

Oh. My. Goodness. When I tell another about a book, I like to tell them the good and the bad of the book. However, there isn’t much to say about this book that is negative!? I mean, the only thing I didn’t like about this book was the fact that it ended.

I personally would have loved to read more action scenes than (and there were quite a bit), but I think overall the contrast between active and inactive moments ended up being pretty satisfactory. From waking up in a house FULL of your dead friends, to escaping and traveling to a Coldtown with your cold ex-boyfriend and a vampire in the trunk of your car, to almost becoming some vampire’s dinner, this book is full of fun activities for the family! … Well, maybe not the whole family, but just for that avid reader in the family.

But come on! What better way to start a book with a massacre!? About the tenth paragraph in the first chapter says this:

“The tan carpet was stiff and black with stripes of dried blood, splattered like a James Pollock canvas. The walls were streaked with it, handprints smearing the dingy beige surfaces. And the bodies. Dozens of bodies.”

How can you not become consumed by this book after reading that!?

Black’s writing seduces you in a reality where vampires run isolated towns and humans lust after the chance to become cold; to be turned into a vampire.

I dare you to take a journey down this rabbit hole, because this book will make you re-think about wanting to become a creature of the night.

“HER WORLD IS CHANGED FOREVER

Callie lost her parents when the Spore Wars wiped out everyone between the ages of twenty and sixty. She and her little brother, Tyler, go on the run, living as squatters with their friend Michael and fighting off renegades who would kill them for a cookie. Callie’s only hope is Prime Destinations, a disturbing place in Beverly Hills run by a mysterious figure known as the Old Man.

He hires teens to rent their bodies to Enders—seniors who want to be young again. Callie, desperate for the money that will keep her, Tyler, and Michael alive, agrees to be a donor. But the neurochip they place in Callie’s head malfunctions and she wakes up in the life of her renter, living in her mansion, driving her cars, and going out with a senator’s grandson. It feels almost like a fairy tale, until Callie discovers that her renter intends to do more than party—and that Prime Destinations’ plans are more evil than Callie could ever have imagined. . . .”

I gave this book 4 out of 5 stars on Goodreads. I will admit the fact that the cover delayed my reading of this book, but once I opened the cover, I couldn’t put it down (more like didn’t want to, seeing as how I had to put it down to eat, sleep, work and use the restroom).

Pros: Well written; the story just flowed. I didn’t feel like it stayed one tone too long, nor was it too fast a pace. Character development was well thought out; I mean, you really get a feel for who these characters are. Great story line; I thought is was unique enough that I didn’t feel as though I have read it before.  THE ENDING! Literally left my jaw on the floor. Really! I had to pick it up, dust it off, and clean up the saliva I left on the floor.

Cons: (I’m no writer, so this opinion is just that. An opinion. Obviously Price did something right, or this book wouldn’t have been such a success) I thought that the beginning of the book could have been a little stronger.; it’s not something that I can place my finger upon and say, “This. This is what is the problem.” – I just feel as though something is missing from the beginning. I wish there could have been more conflict with some of the secondary characters; maybe get a feel for why, exactly, a certain someone decided to become a starter.

Any-who, those are all just my opinions. Some may not make much sense to you (either because 1. You haven’t read it, or 2. You think the story is great just the way it is written and wouldn’t change a thing.), but this is just how I feel.

Price really knows how to line ’em up and knock ’em down. Well, done! I recommend this book to any reader who is looking for a nail-biting dystopian read. 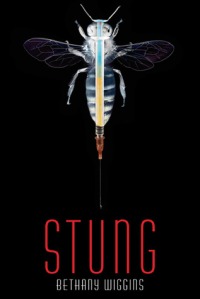 There is no cure for being stung.

Fiona doesn’t remember going to sleep. But when she opens her eyes, she discovers her entire world has been altered—her house is abandoned and broken, and the entire neighborhood is barren and dead. Even stranger is the tattoo on her right hand—a black oval with five marks on either side—that she doesn’t remember getting but somehow knows she must cover at any cost. She’s right.

Those bearing the tattoo have turned into mindless, violent beasts that roam the streets and sewers, preying upon the unbranded while a select few live protected inside a fortress-like wall, their lives devoted to rebuilding society and killing all who bear the mark.

Now Fiona has awakened branded, alone—and on the wrong side of the wall.

I have read many-a-mixed reviews about this book; some of which are quite comical! (Thank you Goodreads.com)

I found this book quite the little reader. I devoured it as if it were a cupcake in the clutches of an obese child; greedily and hungrily.  It wasn’t the best that I have read, nor was it the worst.

While the plot was intriguing and the characters were well developed, I didn’t much care for the redundancy throughout or the fact that our dear heroine was strong one minute and weak the next (now, I get that in her mind, she was still a thirteen-year-old girl, but still).

If you do plan to read this book, take heed and form your own opinion about it. There are so many colors of opinions about this book and not all are kind.

For the love of TEA!

Tea us away maybe?

Learn from yesterday, live for today, and hope for tomorrow!

I became a first-time father at 54. Now I'm a single father of two young children. It's a road less traveled. I'm a little scared.

Cynical and Sassy. Sarcastic and Satirical. Stuff and Such.

It All Started In Iceland...

where the arts meet and are forever changing

where observation and imagination meet nature in poetry

Reading for All Ages

Pop Culture and Geekery with a Dash of Mischief

An independent community for all Doctor Who Cosplayers

Down the rabbit hole...